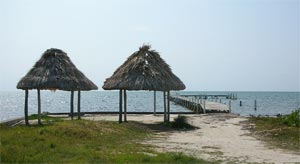 The winter in North America is the ideal time to visit Belize for quite a few different reasons. Not only is it almost always warm in this tiny Central American country on the Caribbean, but the dry season starts in mid-November so the climate is usually near perfect in December. Starting around the end of December it can actually get a bit chilly in Belize, even on the islands and beaches, but most of the month is solidly pleasant.

The average high in Belize City in December is 80 F. (26 C.) and the average low is 71 F. (21 C.). One of the wonderful things about this subtropical climate is that these averages tend to be pretty steady, so these are pretty much the temperatures you can expect every day and night of your visit. It tends to be a bit cooler inland, but not by much, and the rainforests are significantly less rainy during this season as well.

Belize gets most crowded starting just after Christmas and lasting through the first week in January, but the general high season lasts through March. Obviously the folks escaping North American winter are the main cause of this, but it just so happens that this is the best time for weather in Belize as well. So the entire month of December up until Christmas has near perfect weather and relatively small crowds.

If you are going to Caye Caulker or San Pedro on Ambergris Caye you can pretty much just show up and pick a place, but it never hurts to reserve a place in advance once you’ve committed to a plane ticket. You might consider just confirming one night at the place of your choosing because people tend to arrive in the early evening and it’s hard to find a place in the dark. If you like your first night there you can stay longer, but just in case you aren’t crazy about the place you can wake up the next morning and find a new place nearby. Don’t try this during Christmas weeks though.

Actually there isn’t really anything you can’t do in December in Belize. Especially if you are coming in the weeks before Christmas, you should have no problem finding places to book scuba diving, snorkeling, fishing, or sailing, even at the last minute. Of course a big thing among visitors to Belize during winter is just relaxing. There are cool outdoor bars all over the main tourist islands, and you can get a locally-brewed Belekin beer for about US$2 at any one of them.

About 70% of Belizeans are Christians, so something of a traditional Christmas is observed though most of the country. Belize City is known for its street markets in the weeks leading up to Christmas, and many of the folks who live on the islands make at least one special trip to buy gifts and decorations, since there aren’t many real stores in the main tourist centers. If you do want to spend some time in Belize City make sure you do it with caution. Unlike most of the rest of Belize, it does have quite a bit of gun violence in certain areas, so it might be best just to stick to the resort areas.

On Christmas Eve and Christmas Day there will be various celebrations and even midnight masses. So much of the local culture is influenced by the various ethnic groups that make up the population, which makes for some interesting twists on traditions. The most famous celebration is a Maya Deer Dance, and tamales are one of the most common Christmas treats, but it’s all over the map.

Out on the islands you won’t see much in the way of traditional lights and decorations, but this doesn’t mean they ignore Christmas. Children seem to get their hands on an amazing quantity of fireworks during the holiday, so expect to hear groups of small explosions in an unusual holiday tradition that you won’t soon forget.