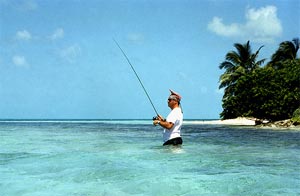 With a stunning coastline bordered by the second largest barrier reef in the world, fishing in Belize is both productive and unforgettable. The varied and reef-covered shoreline combined with over 200 islands, which are called cayes (pronounced “keys”) in Belize, make this a legendary fishing destination on their own, but the country also has rivers flowing through lush jungles in its interior, so river fishing in Belize is also a huge sport.

All levels of experience do well in this tiny English-speaking Central American country. There are guides and daily equipment rentals in the resort areas for people who just want to give it a go on their relaxing Caribbean vacation, as well as full-blown fishing lodges for longtime enthusiasts of the sport. There are also live-aboard fishing charter boats for people wanting to go after different species over different waters over the course of a few days.

Serious fisherman will want to bring their own gear and will know exactly what they’ll be going for. Part of the fun of a fishing vacation in Belize is going after a different species in a different location every day or two. But even beginners are well taken care of in Belize as the relative ease of success and affordable equipment rental options make even a single day enjoyable and productive.