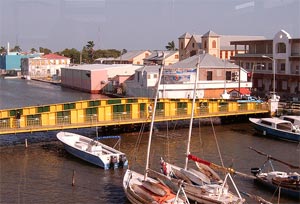 Central America is filled with charming old colonial cities that mix classic architecture with thriving local culture in an intoxicating way. Unfortunately, Belize City is not one of these cities. This urban center of about 70,000 residents is by far the largest in a country that has many different types of tourist draws, but Belize City itself is rarely more than just a transit point for visitors.

Founded in the 17th Century by the British, the city has a fascinating history, but it’s been pounded by hurricanes and other disasters so many times that the country moved the capital to in inland city of Belmopan in 1970. Belize City is mostly a rough-looking town now that looks a bit down on its luck. The country itself has excellent beaches, diving, water sports, ruins, and eco-tourism opportunities, so there are plenty of good reasons to visit. But unless you are specifically interested in Central American urban lifestyles, it’s probably best to limit your stay in Belize City to a day or so. In fact, most visitors to the country fly in and then immediately go to their onward destinations with only the shortest glance at the city.

Hotels/hostels – There are no traditional hostels in Belize City, but there are quite a few guesthouses and other small hotels that offer some hostel-style features like shared kitchens. Prices of accommodation in Belize City tend to be cheap enough that there is no need for dorm rooms. There is no shortage of budget hotel options in Belize City, as there are small older places in the center of the city as well as a few along the coast. And the top range is well represented with several new posh resorts. Reliable mid-range options are the tricky part here, but there are a few options.

What to do – Belize City is not packed with must-see attractions, but there are plenty of things to see if you’ve chosen to spend a day or two here. The historic Swing Bridge (pictured above) dates from 1923 and is the only manually operated bridge left in the world. St. John’s Cathedral was built in the early 1800s and is the oldest Anglican church in Central America. There are many important festivals and national celebrations in Belize City, particularly over weekends, so check the local calendar and you might get lucky with a parade or carnival.

Getting there – Belize City is the transit hub for the entire country so nearly every visitor will either come or go through it at some point. The Belize International Airport on the outskirts of the city is a major airport for the entire region, so flights to Belize City are usually competitive. A taxi from the airport to the center of the city will run around $20. The Marine Terminal in the city’s center is where you board the Water Taxi that takes you to the nearby cayes (islands) and other beach resorts.