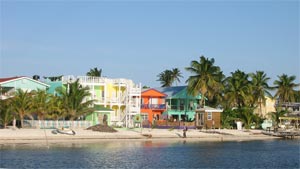 Caye Caulker in Belize is a small island not far off the coast of Belize City, and is the cheaper and more backpacker-friendly brother to nearby Ambergris Caye. The vibe of the island has much more in common with Jamaica than it does with most of the rest of Central America. English is the official language, and it comes with a serious helping of the Jamaican-style accent. Reggae is the default form of music that booms from sound systems throughout the island, although it’s just one part of a larger island mix.

If you are envisioning a holiday where you laze all day on glorious sandy beaches, you should keep looking because Caye (pronounced “key”) Caulker is not that place. Thick mangrove forests front almost the entire island. Those are dense groups of trees and shrubs that literally grow out of the salt water on the coast, making direct access into the water nearly impossible. There are a few small and pleasant beaches on the island so sunbathing is certainly possible, but this is more of a relaxing/snorkeling/diving island than a beach destination.

Hotels/hostels – There are no chain hotels on Caye Caulker at this point, but there are about 40 hotels and guesthouses here. These are almost all smaller, family-run places and very few of them are alike. They range from a backpacker hotel that is essentially a hostel all the way up to a fairly luxurious 3-star mini resort, but most places fall somewhere in between. Prices are higher than they are in most of Central America, but still quite reasonable compared to most package-tourist resorts.

What to do – This is a small island – about 5 miles long by less than 1 mile wide – and to be honest there isn’t much to do. There are no paved roads and really only three streets, if you could call them that. People get around on golf carts and bicycles, and renting either one for yourself will get you familiar with the entire island in an hour or two. There are three main activities that do keep visitors both busy and happy here:

Getting to Caye Caulker – There are two main options for transportation. The Water Taxi leaves the Marine Terminal in Belize City six times a day for scheduled trips to Caye Caulker (in about 40 minutes) and then on to Ambergris Caye. These are basically large speedboats that can seat a few dozen people on the outdoor deck, and the cost is about $10 each way. You can also fly directly from a few local airports to the Caye Caulker airstrip. The cost is about $57 from Belize International Airport, which isn’t all that bad considering all the time it saves, including the taxi from the Airport to the Marine Terminal.