Once you arrive in Belize the fastest and most expensive way to get around is by flying. There are two domestic airlines that handle all the country’s traffic – Maya Island Air and Tropic Air – and their prices, schedules, and aircraft are very similar. Some people seem to prefer one over the other, but there is no clear winner among the two. 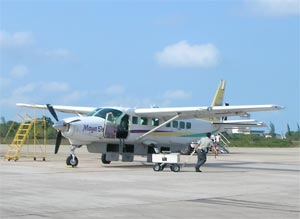 Forget everything you know about getting around in large countries. The domestic flight industry works more like bus or train services elsewhere, and this is a good thing in a country like Belize. There are about a dozen airstrips or airports in the country, and most of them have regular flights that are the same time each day, and with reasonable prices that are the same 2 months before as they are the moment you climb aboard.

Because of this, many people don’t even bother with reservations and advanced tickets. The most popular routes have hourly flights, so the locals just turn up and usually are soon climbing on board the very next flight. Since both airlines use the same facilities and fly to mostly the same places, you usually have two chances each hour to find a seat. If one is full, usually the other will have room.

The only exception to this might be if you are flying into Belize later in the afternoon, and you want to fly right out to one of the islands. Chances are you’d still be fine, but you don’t want to have to spend the night in Belize City unless you absolutely have to. The flights are pretty constant during daylight hours, but not in the evenings. The last flight is usually before 6 p.m., so check the schedule if you are arriving in the afternoon.

Other airports/airstrips where you can fly within Belize:

So the lesson here is that you can save a lot of money by flying out of the Municipal Airstrip instead of the larger airport. 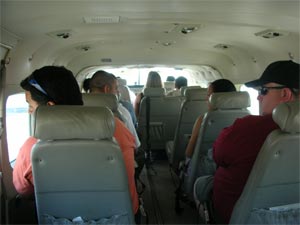 Getting between the two main airports

If you are in a group of two or more you might consider saving money by flying out of the Municipal Airstrip. Taxis are always waiting outside both, and the fare between the two is about $US20 or even a bit below. You can check the prices for your flights on each of the airline’s sites, and decide whether it’s worth it to you.