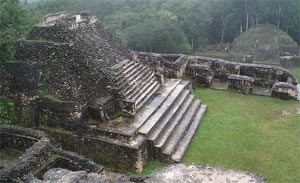 Corozal Town is the largest city in the district called Corozal, but with fewer than 10,000 residents it’s still not much of a city. Corozal Town lies only 9 miles from the Mexican border so part of its appeal is the clear contrast between Belize and its northern neighbor. The city of Chetumal, Mexico is only an hour away by bus, overlooking the same bay as Corozal Town.

Corozal Town has attracted a large expat population, but still remains a slow moving and sleepy town. The people are very friendly and there is something of a hippie vibe around. The setting overlooking the crystal clear bay is tranquil and makes this an ideal place to relax and just soak in the Caribbean atmosphere. English is the official language of Belize, but being so close to Mexico you’ll be hearing quite a bit of Spanish as well.

Hotels/hostels – Accommodations in Corozal Town are fairly cheap so there are no traditional hostels with dorm beds in town. Hotels run from budget and basic up to a few that are like mini resorts. With all the traffic going to and coming from Mexico, there are many Corozal hotels and guesthouses to choose from, and prices are quite competitive.

What to do – Relaxing is the order of the day in Corozal Town. This is a gorgeous section along the Caribbean and the town’s atmosphere feels much more like a lazy island than it does like a part of Central America. The one-hour bus ride to Chetumal, Mexico gives a fascinating contrast if you hadn’t already planned on going to Mexico. The cities are just across the bay from each other and yet could not feel more different.

Unlike the other island and beach cities to the south, this town does not have a large water sports infrastructure. There are operators that run boat tours to nearby islands, but it’s not a big diving or snorkeling spot.

There are the Mayan ruins of Santa Rita to visit right in town. Corozal Town was built on the site of a previous Mayan city, but a small cluster of ruins is all that’s left for visitors. There is also a butterfly breeding center at the nearby Shipstern Nature preserve.

Getting there – There is no commercial airport near Corozal Town, but it’s only about a 2-hour bus ride from Belize City, and the buses are frequent. There are also buses to and from other cities in Belize, as well as the regular and popular bus route that shuttles people back and forth to Mexico just to the north.