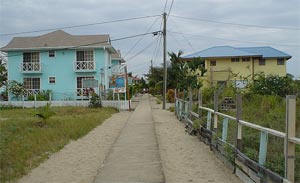 Placencia is the name of the 17-mile long, narrow peninsula on Belize’s southern Caribbean coast, as well as the small village at the tip of the peninsula. The village itself is nothing too special, but the Placencia Peninsula is one of the most popular holiday destinations in the country. Unlike the tourist islands of Caye Caulker and Ambergris Caye up north, Placencia has excellent beaches that are easily accessible to anyone.

The village of Placencia has only about 500 permanent residents so it’s nothing approaching a real city. It’s little more than a collection of brightly colored houses and other small buildings that serve as the hub for the local tourist infrastructure. The “main street” is literally just a sidewalk, and it feels much more like a lazy Caribbean Island than a part of Central America. The official language in Belize is English and the accent is noticeably Jamaican.

Hotels/hostels – There are no traditional hostels currently operating on the Placencia Peninsula, largely due to the fact that small hotels and guesthouses are quite cheap already. There is a good selection of smaller hotels along the beaches, and virtually all of them are locally owned. Placencia offers a bit more luxury than Caye Caulker, but it’s not the resort-filled zone that Ambergris Caye is becoming. There is no shortage of quality budget hotels in Placencia, but reservations are recommended during the busy winter seasons.

What to do – Placencia is where people go to relax on the best beaches in Belize so most of the activities are water related:

Getting there – The cheapest way to get to Placencia is on one of the old American school buses, with a changeover in Dangriga. The entire journey takes 5 to 6 hours and there are only one or two connections per day. It’s inexpensive, but time consuming so most people fly from Belize International Airport to the airstrip on Placencia. Two competing airlines have almost hourly flights that cost around $80 one-way. There are also charter companies that run sail boats to Placencia from Ambergris and Belize City.