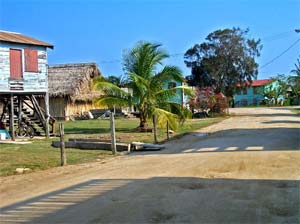 The largest town in southern Belize isn’t yet a major tourist destination, but that has been changing in recent years. Dangriga (formerly known as Stann Creek) has served more as a hub for travelers through the country, especially those moving on to the Placencia Peninsula just to the south. But this town of about 10,000 residents is being discovered and its tourist infrastructure is building steadily.

The population of this coastal town is made up almost entirely of the Garifuna people. These are mostly blacks who’ve descended from shipwrecked slaves from the island of St. Vincent and native Central Americans, and they settled in Dangriga after the British colonized the country in the late 1700s. This is definitely the best place to come see this interesting culture with their unique art and gift items on display all over the city. And Punta-rock, which is popular all over Central America was born in Dangriga and is still very popular in the city’s clubs.

Despite being on the coast, Dangriga doesn’t offer the water sports options of most other popular cities in Belize. You can take a day or overnight trip to one of three nearby islands, Man-o-War Caye, Southwater Caye, and Tobacco Caye, on which you’ll find excellent scuba diving, snorkeling, and fishing. This is a great area to avoid the heavily-touristed islands in the north of the country but still have many activities nearby.

Shopping is a popular activity in Dangriga, as this is considered the “Culture Capital” of Belize and local artwork is unique and affordable.

Nightlife is very good for a city of this size. Most nights you can find Punta-rock bands playing in local bars, but there are usually other options as well, including karaoke of all things.

Accommodations in Dangriga range from one end of the spectrum to the other. Val’s Backpackers Hostel is at the low end, with beds under US$20 per night, and the Jaguar Reef Lodge is also not far away with rooms starting around US$250 per night. There are about a dozen hotels in Dangriga and booking them in advance can be frustrating since most of the cheaper ones don’t have online booking available. Outside of peak season during the Christmas holidays it’s usually quite easy to find a room by just showing up, but with so few places in the city you can never be sure you’ll find a place in your price range. There are several other hotels with rooms close to US$50 and several more that are several times that.

If you’ve rented a car you can drive to Dangriga in about 90 minutes from Belize City and around an hour from Belmopan. The roads are paved and traffic is usually light. There are also several buses per day that come connect Belize City with Dangriga, with a stop in Belmopan on the way.

Dangriga has its own airstrip, so rich or impatient people can take a short flight from many other cities in Belize. Both of the country’s airlines make the trip each day and you can get more information on the Belize domestic flights page.