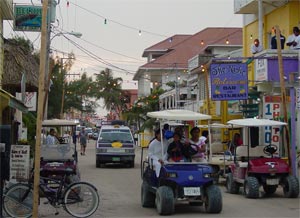 The town has about 4,000 year round inhabitants, but not a single building taller than three stories, so this is more of an island village than a city. For broader information on a visit to Ambergris Caye with all the snorkeling and diving and so forth, check out the Ambergris Caye guide page.

San Pedro is the main shopping and restaurant district of the island so even if you are staying at a resort up or down the coast, you’ll want to spend some time checking out the main village here. In addition to all the souvenir shops and restaurants you’ll find a few hidden gems. There is a tiny library near the elementary school where even visitors can check out books for free in addition to buying some used books for a couple dollars.

Only a handful of San Pedro’s streets are paved and the paving is like crude cobblestones, so heavy rains can actually take a greater toll on these streets than on the unpaved ones. One of the things that make Ambergris so pleasant and relaxing is the fact that very few actual cars and trucks are licensed to drive on the island. Taxi service is available but consists mostly of golf carts.

Practical information – There are two banks with ATMs in San Pedro, as well as a market, a pharmacy, a hardware store, a post office, a wine store, and a couple of full service travel agencies in the center of the village.

Getting around – It’s so small that most people get around on foot, but if you feel the need for a tiny bit of speed you can rent either a bicycle or a golf cart. Both can be rented by the hour, half-day, full-day, or week, and obviously the bicycles are by far the cheaper of the two. Golf carts can be a great way, especially for two people, to see the main part of the island in a hurry, but the electric ones still don’t have the range for anywhere near a full island tour. You’ll be advised to stay within a few mile range or else be stranded. Some companies rent gas-powered carts with a longer range, although the far northern part of the island is still tough to see as the trails end before you get there.

Hotels/hostels – Most of the hotels and resorts on Ambergris are located outside of central San Pedro. There is a hostel a few minutes north of the center by foot, and actually a few budget hotel options right in the main San Pedro district, as well as a few on the Caribbean beach. Most people who come to this island are interested in snorkeling, diving, and water sports, so you should really think twice about booking a place right in the center of town if that’s your goal as well. The nicest and most luxurious hotels and resorts are all north and south of San Pedro, with the northern part of the island being the most scenic and most lush.