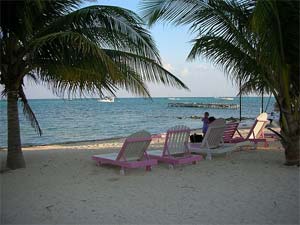 Once June arrives the busy season at the beach resort areas is officially over and the wet season officially begins. The good news is that hotel and resort prices are now at their lowest, where they’ll stay through November, and crowds are significantly smaller as well. The bad news is that it’s pretty hot and fairly sticky around the clock, and afternoon rain showers are an almost daily occurrence.

San Pedro Lobsterfest – Mid June – To commemorate the opening of the 2008 lobster season the village on Ambergris Caye kicks off a long food-themed festival that began in 2007. The 2008 dates are June 14-21.

Dia de San Pedro (San Pedro Day) – June 29 – This celebration on Ambergris Caye honors St. Peter, who is the patron saint of the island’s San Pedro town. A boat parade on the final morning of this 3-day festival is the highlight, but there are events on the island during the entire final week of the month and a big fishing tournament that begins just after.

Placencia Lobsterfest – Late June – The lobster season begins in mid June and Placencia throws a 3-day wingding in the village to celebrate the occasion. The 2008 dates are June 27-29.

These stats are for Belize City, but the country is small and all the coastal cities have similar climates. The cities that are further inland usually have slightly hotter days and noticeably cooler nights, but generally are similar. Inland Belize gets far less rain during the rainy season, so visits to the jungle area or San Ignacio should not be problematic beyond the hot days, but since humidity is usually high and there is no breeze like on the coast it can really be uncomfortable.

The rain comes most afternoons along the coast, and can be very heavy at times. It’s not likely to ruin your whole day, but it might ruin a couple of hours.

Flights to Belize don’t really get any cheaper during the slow tourism season, but it should be easier to get a seat without much notice. Unfortunately for travelers, airlines just schedule fewer flights during slow seasons so prices to a destination like Belize don’t ever really get too cheap.

Nearly every hotel and resort in Belize drops to their low-season rates as of May 1, so by June it’s really a buyer’s market. Some places drop their rates by 10-15% and others drop them by closer to 40%, so bargains like this can be found if you look around. If you are sensitive to humidity you should be sure to find a hotel with air conditioning since nights can be steamy.

All the usual offerings in the resort areas remain possible, although there will be fewer companies offering the diving, snorkeling, and sailing in the resort areas, and the fishing season is at its peak for the hardcore anglers. It should be easier to bargain for a better deal, but not really by too much since some of the operators take the whole season off. During summer there are plenty of people headed to the Maya sites and the jungle areas.