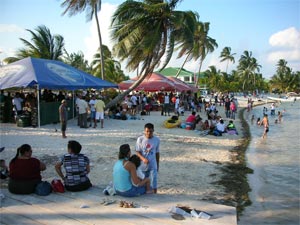 January is prime visiting season in Belize, and strangely there aren’t many special events that help define the season. This is probably the best time of the year to visit Belize and there is plenty to do in this tiny Caribbean country as it is, so the fact that you won’t be distracted by strange local events really doesn’t matter much.

January average high/low in Belize City 80°F/70°F (26°C/21°C) with average rainfall of 4.5 inches (11 centimeters). This is a small country and San Pedro on Ambergris Caye and Caye Caulker are both nearby, so they have nearly identical weather to Belize City. When it does rain it tends to come in bursts, so it’s unlikely you’ll have much rain, and if you do it will be only over the course of an hour here or an hour there.

Once you get past the first week in January you are out of “peak season” but still in “high season.” Outside of the Christmas weeks it’s always easy to get cheap airfare to Belize, regardless of how perfect the weather is there or how lousy it is where you are. The trick is to buy your ticket as early as possible, and check for flights in the middle of the week if you are planning without much notice.

If you want to laze around all day on the beach you should probably fly straight down to the Placencia Peninsula, as it has the best sandy beaches in the country and also lots of water sports activities available.

Belize is a major destination for serious scuba diving, but these same excellent conditions translate into great snorkeling as well. Sailing and fishing are both extremely popular in Belize with great conditions for both, especially during January.

You might also try sea kayaking, which is an interesting mix of a water sport, sightseeing, and camping on secluded islands over nights.