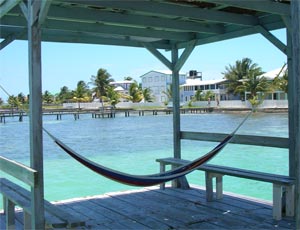 February in Belize is still the prime tourism season, especially for the resort islands of Ambergris Caye and Caye Caulker, but crowds tend to be a bit lighter than during the busiest part of the year around News Years. There are a few events in the country that might be of interest to travelers, but for the most part this month is one that’s celebrated by visitors escaping the cold climates of North America and doing as little as possible.

These stats are for Belize City, but most of the coastal areas people visit are close and have similar climates. The cities that are further inland usually have slightly hotter days and slightly cooler nights, but generally are similar.

When it rains in Belize during February it tends to be in short bursts during the afternoon, so you might have to take cover for a bit, but it’s extremely unlikely the rain will ruin your day, much less your whole stay.

February is high season for hotels in Belize, but it’s not the “peak season” around Christmas and New Years, so prices don’t get too far out of hand. There are hotels for every budget, and often they don’t get booked up too far in advance, especially the cheaper ones, so arriving without a reservation usually isn’t a problem. There are even a few hostels in Belize if you are on an even tighter budget.

Since this is the dry season with nearly perfect weather every day, this is also the best time of the year to enjoy the scuba diving, snorkeling, fishing, and sailing from the islands off the north or even from Belize City itself.

There are also plenty of interesting things to do inland, so visitors to the San Ignacio area will stay busy too, and there are quite a few ruins where you can have a quick look at the Maya civilization that mysteriously disappeared so many centuries ago.