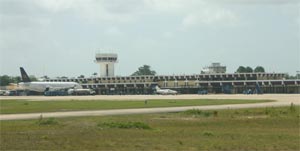 Booking a flight to Belize is pretty straightforward if you are coming from the United States or Canada. In case you haven’t been there before, Belize is a very small country with a population of only around 300,000, and its one international airport only handles a few dozen flights a day.

If you are coming from the States you’ll be connecting through Dallas, Houston, Miami, Atlanta, or Charlotte, and then flying on to Belize City from there. There are also flights to Belize from Los Angeles, New York City, Washington DC, and Toronto that go less often, so it’s a good idea to try different days of the week if you are interested in finding only a nonstop flight.

The main airport in Belize

Belize’s only international airport is Philip Goldson International Airport in Ladyville, which is 10 miles northwest of central Belize City, and is a $US25 cab ride into town. By the way, as wonderful as Belize is, Belize City is not a place you should plan on staying unless you have a specific reason to do so. It’s really neither charming nor nice, and it’s become rather violent in places as well.

The main carriers that serve Belize are American, US Air, Delta, and Continental, but the Central American airline Grupo Taca flies from Houston and Miami into Belize City as well.

The most popular times for vacations to Belize are during winter, particularly during the Christmas and New Years weeks. During these times you might find that flying directly into Belize costs an arm and a leg, and fortunately there are alternatives. Cancun is about 7 hours away from Belize City by luxury bus, and the airport there is much larger and busier.

Alternative ways to get to Belize

If Belize prices are insane and you have a bit of extra time for ground travel you should check fares into Cancun (code CUN). Many regular visitors to Belize fly into Cancun each time, saving a couple hundred dollars in exchange for a bus journey that connects some interesting places. You first have to take a 5-hour $US10 air-conditioned bus from Cancun to Chetumal, which is on the border with Belize. From there you grab any Belize City-bound bus for about $US6. There are buses leaving almost hourly from there, and several of them are air-conditioned and luxurious. It might sound like a hassle, but if you can find a flight into Cancun for $300 less than into Belize City, it begins to sound like more of an adventure than a hassle.