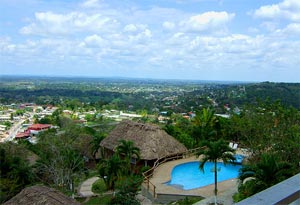 San Ignacio, along with its neighbor Santa Elena, make up the second largest urban area in Belize, but still only have a combined population of around 14,000. Far from Belize’s famous beach and island destinations, San Ignacio is near the border of Guatemala and a popular stopover for people traveling between Belize City and the Flores/Tikal ruins.

Situated between two rivers in a forest region, San Ignacio is also home to some excellent nature excursions in addition to the modest Mayan ruins of Cahal Pech nearby. English is the official language of Belize, but San Ignacio is a very mixed city and Spanish is often used. The towns also have quite a few ethnic groups represented, including a rather large Chinese population.

Hotels/hostels – There are no standard hostels operating in the San Ignacio area, even though this is a major hub for backpackers and young people. Prices of the small and friendly hotels in the area are quite reasonable so there isn’t much demand for dorm-style accommodation. There are plenty of budget San Ignacio hotel options in and around the town. Quite a few modest and family-owned small hotels are popular with the backpacker types, and a few large and lush resorts are available for people on a bigger budget.

What to do – Unlike the beach and island areas in Belize, there are many and varied options to keep visitors as busy as they’d like:

Getting there – There is no commercial airport near San Ignacio, but bus service is frequent. Buses from Belize City arrive about once an hour and the trip takes about 2 and a half hours. Some companies operate shuttles directly from the Belize City airport into San Ignacio, which are more reliable than the countries sometimes-questionable bus network. Long distance bus services between Belize City to Flores usually stop in San Ignacio, so this can also be used as a one-day stopover if you are connecting those two cities.