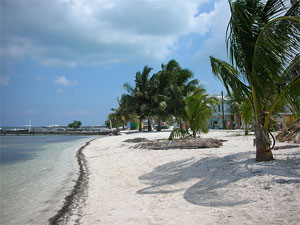 Just like virtually the entire Central American and Caribbean regions, summer is actually the off-season in Belize. Since the weather ranges from warm to even warmer all year, most people think of this country as a place to go to get out of the cold rather than a year-round resort area. It’s true that the weather tends to be more pleasant from November through March than it does the rest of the year, but not by much.

The great news is that hotels are at their cheapest during summer, and crowds in general will be small nearly everywhere you go, so if sun and solitude are your thing it can be a nice combination.

There really aren’t too many major events during summer here, but there are quite a few smaller festivals you might consider taking in if you happen to be in the area at the time. The lobster season begins again on June 15, and Ambergris Caye, Caye Caulker, and Placencia each have a lobster festival around that date to celebrate. Aside from those it’s mostly modest happenings that probably aren’t worth seeking out unless you have some other connection with the thing.

You can see the listing of summer events in Belize on these pages:

Yes, it’s the “rainy season” all summer, but unless you’ve been here or someplace like it during summer it’s probably not nearly as bad as you might think. In the Pacific Northwest the “rainy season” lasts from November through April, and it literally rains half the time and on most days. But here, as is true in most of the tropics, it tends to rain almost every day, although in short and predictable bursts. You’ll see the clouds gathering in the afternoon, then it lets loose for much less than an hour (usually) and it clears up again. Much of the rain also occurs late at night, so it will rarely ruin your day unless you get really unlucky.

The above averages are from Belize City, but this is a small country so the averages for all the beach and island areas will be nearly identical.

The problematic thing for many people is it does tend to be rather humid all summer, but again, it might not be as bad as you’d think. Humidity is high on the coastal and island resort areas, but these areas all have near-constant sea breezes that moderate much of the unpleasantness, and it can feel quite nice most of the time. If you are coming here to dive or snorkel then you’ll be splashing around so much that it won’t have much affect on you.

People who are especially sensitive to humidity might feel uncomfortable so a summer trip to Belize isn’t for everyone, but as long as you choose a hotel that has air conditioning available you’ll be able to sleep fine and also go back to your room during the day for a quick break if need be.

The interior of the country tends to have slightly warmer days in summer, but also cooler nights. If you are thinking about exploring the jungle regions or seeing some of the Maya ruins it could get quite uncomfortable because there is usually no sea breeze to help out.

While the hurricane season technically lasts from June 1 through mid-November in this region, the reality is that when they do occur they are almost during August through October. Another thing to consider is hurricanes will always be tracked for many days before they even reach the country, so it’s not like you’ll have no time to get away if you are unlucky enough to be in Belize during one of the rare hurricanes. Sure, it’s possible that you’ll book a trip in August only to find a hurricane building a few days before you leave, but it’s very unlikely.

The best part about visiting in summer is that every one of the Belize hotels charges their low-season rate starting by May 1 and continuing through November. This means a room in a resort that might be US$150 per night in January could be US$95 per night during summer. Some drop their prices more dramatically than others, so a good bargain-hunting tip is to check a few places and find the ones that offer the steepest summer discounts.

Airfare to Belize in summer

If you are coming from the United States or Canada, flights to Belize don’t really get cheap during summer. The airlines that serve the country reduce service due to the lower demand so bargains are hard to come by. You might look for special fare sales, particularly from American Airlines, but generally the best advice is to book early.