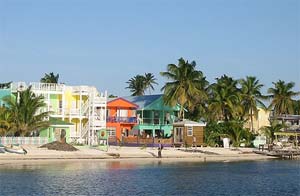 July is part of the slow tourism season in Belize, partly due to this being one of the wettest months of the long rainy season. But fear not, as the rain tends to come late at night and the cool Caribbean breezes help keep the beach and island resorts tolerable even on the worst days. There aren’t many proper events during July, but there will always be no shortage of things to do since the water sports, jungle tours, and Maya ruins are all available 12 months a year.

Benque Viejo Fiesta – mid-July – The small town of Benque Viejo is just 2 miles from the Guatemala border near San Ignacio and it doesn’t have much to offer for tourists, but this 9-day religious festival held each July sounds interesting if you are in the area. They celebrate the patron saint of the village with a fair, marimba bands, games, and prayer.

Caye Caulker Lobster Festival – sometimes in early July – The resort island of Caye Caulker celebrates the June 15 reopening of lobster season with a festival in either late June or early July. As with most things in Belize, tracking down exact dates for each year is difficult, but the festival actually appears to be in late June in 2008.

These statistics are for Belize City, but this is a small country so there isn’t a huge variation from one end to another. The cities that are further inland usually have hotter days and noticeably cooler nights during summer, but generally are similar. Inland Belize gets far less rain during the rainy season, so visits to the jungle area or San Ignacio should not be problematic beyond the hot days, but since humidity is usually high and there is no breeze like on the coast it can really be uncomfortable.

Rain during July tends to be late at night and in the morning, and most afternoons are reasonably dry. As the month goes on there is an increased likelihood of tropical storms coming off the Caribbean, but this is not yet the hurricane season.

Airfare to Belize remains fairly expensive from the United States and Canada during July. Sure, this is the off season, but for places like Belize that don’t have their own major international airline it just means that the airlines that do fly into the country reduce their service when the demand is lower. You might keep your eyes open for a fare sale, particularly from American Airlines, but otherwise the chances of getting a cheap flight are not great.

Even though flights are rather expensive during July, the opposite is true of the Belize resorts and hotels. Nearly every place in the country is on reduced rates all summer and some of them can be quite cheap. Some of the resorts have prices around 20% lower during summer while others reduce their rates by up to 40%. For the sake of value you might consider finding one that really cuts their price way down. Booking a place with air conditioning is more important this time of year since nights can be muggy and there is no guarantee you’ll have a breeze through your open window.

In the resort areas some of the smaller hotels actually close this time of year, but even so it’s still quite easy to find a room just by walking up on the day you arrive. Much of Belize’s hotel business comes that way all year round, so you should have no problems during July.

The islands of Ambergris Caye and Caye Caulker still offer the same scuba diving, snorkeling, and sailing they do during high season, although there are fewer operators working during summer so you can’t necessarily haggle the price down too much. Fishing in Belize is quite big during summer, and the Maya sites are very popular among those touring Central American on a summer vacation, even though the days do tend to be quite steamy inland.