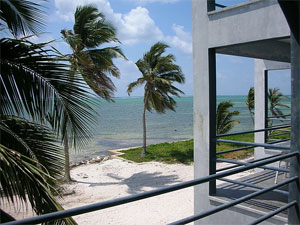 August is one of the least popular months to visit Belize, so those who dare are rewarded with cheap hotel prices, limited crowds, and wonderful solitude (for the most part). This is the first month on the calendar that visitors have to keep an eye on storm systems in the Caribbean before they arrive. More of this is covered in the summer in Belize section, but put simply, instead of having a zero percent chance of being in the path of a slow moving hurricane, visitors to Belize in August and September have a very tiny chance of being in the wrong place at the wrong time.

San Pedro’s International Costa Maya Festival – early August in Ambergris Caye – This used to be called the Sea & Air Festival for some reason, but now the Costa Maya Festival is the absolute highlight of the San Pedro entertainment calendar. There are parades, dancing, bands, contests, and international food, which are all featured at this 4-day blowout. Since this is the off-season for tourists you can expect a mostly local crowd, which should add to its authenticity. The 2008 dates are August 7 – 10. More information is available on the official Costa Maya Festival site.

Deer Dance Festival – late August in San Antonio – This festival runs for 9 days starting in late August in the southern Belize city of San Antonio, which is just a bit inland from Punta Gorda. It’s a Maya religious celebration where the highlight is a simulated deer hunt featuring costumed characters that reenact the hunted while the hunters symbolically pursue. The 2008 dates are hard to confirm at this point, but it’s always late in the month and sometimes stretches into September.

The below statistics are for Belize City, which is on the northern coast, so this should be very accurate for the nearby islands and beaches as well. This is a small country so variations from one part to another are small. Generally during summer the inland areas have hotter days, cooler nights, and get much less rain.

This is the rainy season in Belize, so it’s likely you’ll be experiencing some during your stay, but the good news is it occurs mostly at night and in the early mornings in the coastal areas and on the islands. The hurricane season begins in June, but August is the first month you really have any shot of hearing about one. Hurricanes in this region are always publicized way in advance of landfall, and are quite rare in general, but ignoring the possibility would not be wise.

>>more information about summer in Belize

You’d think the people who are brave enough to book a flight to Belize would be rewarded with low prices, but that’s not usually the case. When it’s low season here the airlines just scale back service instead of slashing prices to fill seats. Your best bet is to book early. There might be fare sales once in a while, but they are rare during this season. American Airlines has the most flights, so their newspaper ads are probably the best place to look for specials.

You’ll have pretty much the run of the country during August, so you can stay in just about any hotel in Belize and you’ll also be getting their rock bottom low-season rates. Some places charge a bit less during this time of the year, and others charge much less than their peak season rates. If you compare a few places you might find some of the better deals are at some of the Belize resorts that slash their rates the most. Some hotels in the country do close completely during this season, but you’ll still have no problem finding a room, even if you come with no reservations.

The popular activities at the beaches and island resorts like diving, snorkeling, fishing, and sailing go all year round. Some operators close down this time of year, but you’ll have no problem finding one that’s open when you arrive. The interior jungle areas are popular in summer among backpackers checking out the Maya sites. The days can be steamy, but at least nights cool down enough to where you can sleep. Still, it’s a good idea to make sure your hotel has air conditioning if you are headed to a place like San Ignacio.