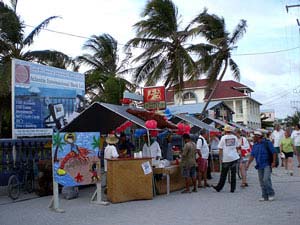 The rainy season in Belize is in effect during June, but that doesn’t stop San Pedro Town on Ambergris Caye from celebrating the opening of the year’s lobster catching season with a big party. The inaugural San Pedro Lobsterfest in 2007 was deemed a big success by organizers, so hopes are high for another home run when the 2008 Lobsterfest kicks off on June 14 in the island’s major village.

In 2007 Tino Gonzales won the prize for most pounds of lobsters caught on opening day with 717 pounds hauled in. The following day was the Block Party where prizes were awarded in various lobster-related competitions including Best Lobster Dish that went to Elito Arceo of Tabu Café for his lobster stew. Locals Sterling Vorus and Alyssa Arceo were crowned Lobster King and Queen of 2007, which will no doubt make their lives easier in the future.

The official website of the San Pedro Lobsterfest says the event is scheduled for 4 days from June 14 to 21, so it’s unclear how that works out, math-wise, but I’m sure everything will be updated on the official events section of the site as the festival approaches.

Highlights last year were the “Meat and Greet” kick off party at Banana Beach on opening night, as well as the Portofino Beach BBQ, the all-you-can-eat lobster pizza night at Pedro’s Inn, the Afternoon Festivities at Fidos, and the Portofino Lobster Feast. There is also sure to be live music and booths set up by local businesses so this sounds like a huge highlight for visitors as well as the locals.

The lobster-catching season in Belize runs from June 15 to February 15, with the remaining 4 months being closed as this is the mating and spawning season for the delicious crustaceans. There have long been similar festivals in Caye Caulker and Placencia, but San Pedro being much larger this is likely to be the most important Lobsterfest in the country already.