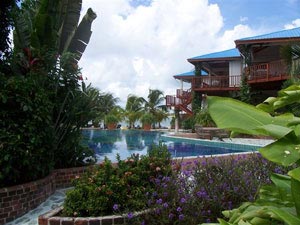 The hotel and guesthouse scene in Placencia is similar in many ways to that of Caye Caulker and San Pedro on Ambergris Caye, and in many ways Placencia is somewhere in between the vibe of those famous offshore islands. It’s not quite as backpacker/hippie friendly as Caye Caulker, and it doesn’t have nearly as many posh mini-resort options as Ambergris, but it does have far better beaches than either of them so this is a big magnet for anyone who likes peacefully lazing around on the sand during their Caribbean holiday.

Getting to Placencia is the trickiest part. It’s easiest to reach on a 40-minute flight from one of the two airports near Belize City, but those flights aren’t exactly cheap. You can take a combination of two cheap buses from Belize City, but that will take you 4 or more hours and the timing can be tricky.

This is not your typical Caribbean beach resort

The similarities with Caye Caulker and San Pedro are that the tourism industry on this 16-mile peninsula jutting into the Caribbean has so far been immune to corporate takeovers or chain-building attempts. Everything along the peninsula – which has its most dense settlement at the tip in the village also called Placencia – is independent and one of a kind. There’s no Hard Rock or Carlos and Charley’s or anything else you’ve ever heard of. There are no Hiltons or Marriotts and nothing even resembling a 7-Eleven.

This is the beach resort that time forgot, and that’s a huge part of its appeal. The “main street” through the Placencia village is a one-mile-long concrete sidewalk that was built so carts of fish could be wheeled around. This was mostly a fishing village only a decade or two ago, but now it exists more to keep tourists happy with tiny guesthouses dotting the coast in between sailing and dive operators.

Hotels in Placencia tend to be cheap by Caribbean resort standards, but in a way the standards themselves can be low as well. Don’t expect modern bathrooms and powerful air conditioners in a Placencia hotel room that goes for $US25 per night. Places are honest about what they offer, but it’s important to realize this is a slow and simple little village so keep your expectations in line with that.

Here are a few examples of Placencia hotels broken into categories:

Seaspray Hotel is a basic 21-room place on the beach in the village. It was the first hotel in the area, starting with basic rooms for fishermen. The rooms are still basic and start as low as $US20 in off-season and $US25 in high season. Larger rooms with A/C, TV, and other options go all the way up to $US65 in high season.

Ranguana Lodge consists of 5 beach cabanas and is also located in the Placencia Village. The cabins go for around $US80 per night including all taxes, and all have TV and microwave ovens, but only three of the five have air conditioning.

Maya Beach Hotel is a modern boutique resort located near the center of the peninsula, so it’s not close to the village, but there are a few small restaurants and shops within walking distance. This is one of the most popular hotels in the area, and each of their rooms has a unique look and theme. Prices in low season start at $US65 per night and only a bit higher in peak season.

The Inn at Roberts Grove is a large and new resort hotel in Placencia with over 50 rooms. Their cheapest rooms start at $US180 per night, and depending on the room type and the season you can pay as much as $US565 here for its finest suite.

Chabil Mar Villas opened in 2005 and brought a new degree of luxury to Placencia. Their 22 condominium suites start at $US300 in off-season and $US375 in peak season, going way up from there. This place gets high ratings from previous guests and specializes in honeymoons and romantic getaways.