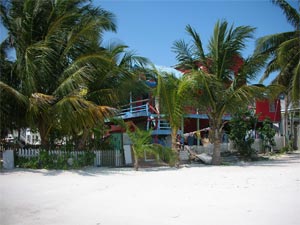 March in Belize marks the final full month of the high tourism season and also of the reliably perfect weather. The late Winter or early Spring Break crowds are probably more interested in the usual aquatic activities of scuba diving, snorkeling, sailing, sea-kayaking and such, but there are a few interesting events that might play a small role in your holiday as well.

Baron Bliss Day, March 9 – This major annual holiday curiously celebrates the anniversary of the death of a British Baron who arrived in the Belize City Harbor while ill in 1926, and then died less than two months later, but not before he changed his will so the bulk of his fortune went to the country, or so the legend goes. He is honored each year with a 3-day weekend featuring a large regatta in Belize City Harbor, as well as parties and fishing tournaments throughout the country.

La Ruta Maya Belize River Challenge, March 7 – 10, 2007 – This annual 4-day canoe race traces the route of the ancient Maya on the Macal and Belize rivers. It begins in San Ignacio and ends in Belize City. More information is available on the official La Ruta Maya website.

San Cas Belmopan Cycling Classic, March 12 – This annual cycling event begins in Belize City and goes to the capital of Belmopan before returning to Belize City for the finish.

These stats are for Belize City, but most of the coastal areas people visit are close and have similar climates. The cities that are further inland usually have slightly hotter days and slightly cooler nights, but generally are similar.

When it rains in Belize during March it tends to be in short bursts late at night. This and April are the driest months of the year in Belize, so chances are you’ll see little or no rainfall at all.

Flights to Belize are quite expensive during most of March, so the best advice is to book as early as possible. If weekend flights are looking really pricey you might try switching to Tuesday or Wednesday flights if you have the flexibility.

March is the high season in Belize, but still cheaper than the weeks around Christmas and New Years. You’ll find that hotels in Belize are a bit more expensive than they are during the off season, but not outrageously so. Compared to most other Caribbean resort areas Belize is still a bargain, and finding rooms upon arrival is rarely a problem in March, although it’s good to have at least a few places in mind because some of them do fill up.

March is the final month of the year when all the offshore islands and beach areas like Placencia are going full guns with scuba diving, snorkeling, sailing, fishing, and sea-kayaking. All of those things can be booked once you arrive, and usually just an hour or two before you want to begin, so you don’t need to worry about locking everything in before you get there.