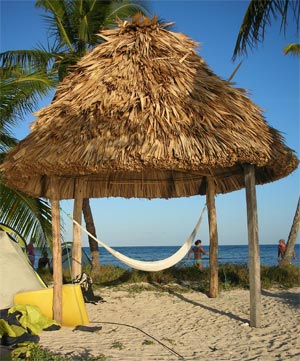 April can be an ideal month to visit Belize as the wet season hasn’t officially begun, and yet crowds are starting to thin out. When Easter falls in April, as it will in 2009 and 2010, it can be fairly crowded during the traditional Spring Break week leading up to it. But when Easter falls in March, as it does in 2008, the month passes by with very few events of note.

When Easter falls in April, the month is filled with special events surrounding that holiday and Good Friday. Check back for 2009 events as Easter falls on April 12 of that year. In 2008 you’ll have nothing to distract you from relaxing each morning before you start drinking some cheap and ice-cold Belikin beers all afternoon in the warm sun.

These stats are for Belize City, but most of the coastal areas people visit are close and have similar climates. The cities that are further inland usually have slightly hotter days and noticeably cooler nights, but generally are similar. So daytime temperatures can start feeling extreme during April in the inland areas, but nights tend to be pleasant throughout the country. The warm nights on the coast are usually offset by pleasant sea breezes, and the lower evening temperatures inland are mild enough that sleeping with no air conditioner is still okay for most people.

April is actually one of the driest months in Belize, so if you do get a shower it will usually pass through quickly late at night. And if you happen to get rain during the day in April it will usually be over shortly after you’ve reached cover.

Flights into Belize during April are usually off their peak prices, but still not what most people would call cheap. American Airlines usually has some of the better deals from the United States. Most flights from the western half of the country will connect in Dallas, and flights from the eastern half will connect through Miami. It’s rare to see fare sales during this time of the year so the best advice is to book as early as possible.

Finding a hotel in Belize during April is usually quite easy, even if you just show up with bags in hand. Most hotels don’t switch to their off-season rates until May 1, but you might be able to find a place that cuts their rates sooner or is willing to make a deal. With the exception of some of the more posh resort-type places on Ambergris Caye, many of the hotels in Belize aren’t even available to book on the large hotel search engines.

If you don’t see something you like in a normal way, you can check the hotels sections on this site, which has many links to individual hotel websites. Some of them can accept bookings on the site, and others will confirm by e-mail. This country isn’t too computerized yet, so don’t worry if you don’t hear back right away. Even if your first choice is sold out it’s usually possible to find another similar place on the next block that will have a room available.

As this is the final month of the dry season, it’s still ideal for scuba diving, snorkeling, fishing, sailing, and sea-kayaking. The warm temperatures will make these aquatic activities even nicer than usual, and you still won’t have to duck heavy thunderstorms yet.