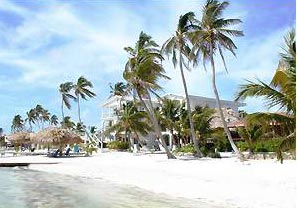 Ambergris Caye is much larger than nearby Caye Caulker, and it’s where you’ll find most of the island hotels in Belize. There are a few cheap hotels on this island, and one place that calls itself a hostel, but most of the hotels here are in the middle and upper price ranges for Belize, although many of those will still be bargains for people used to South Pacific or most other Caribbean prices.

By the way, Ambergris Caye is about 25 miles long and about 1 mile wide and hotels can be found on most of the southern twoi-thirds of the island. The only town on the island is called San Pedro and many Ambergris Caye hotels advertise themselves as being in San Pedro, whether they are or they aren’t, because many people who are searching don’t know the difference. Here I’ll be mostly describing the hotel scene that isn’t near the village – check out this link to find out more about San Pedro hotels.

It might be easier to start by telling you what you won’t find on Ambergris Caye. There are no tall buildings, no big chain hotels or restaurants, no mega resorts, and only a few paved roads, if you could even call them that. There are also very few beaches in the typical resort sense. Most of the island is ringed by mangrove forests and some of the better hotels do have little strips of sandy beach out front, but for miles and miles of glorious beaches you’ll have to either go to the Placencia Peninsula or to another country altogether.

What you will find on Ambergris Caye are dozens and dozens of small hotels and mini-resorts catering mostly to people who’ve come to relax on a charming little Caribbean Island and perhaps do some snorkeling or scuba diving once in a while. And as mentioned, your money goes a lot further here than it does in Hawaii or St. Barts, so if you are a 2-star traveler elsewhere you might be a 4-star traveler here.

Pedro’s Backpackers Inn – Some of the cheapest beds on the island can be found at Pedro’s, which is about half a mile south of the village. They have 18 rooms with 2 beds in each that start at $US10 per person per night. They’ve got a full bar, a pizza restaurant, and free high speed internet. They also have a few deluxe rooms starting around $US35 per night for those looking for more than just a bed.

Ruby’s Lagoonside (site here) – This is the cheaper of the two Ruby’s properties, with rooms for two people starting at $US25 per night with a bathroom, and $US16 per night with a shared bathroom. This is pretty basic stuff, but if your budget is tight you can still have fun here.

Corona Del Mar – This is a good example of mid-range on Ambergris Caye. They are a newer place with 12 rooms and 4 apartment suites. Their low-season prices start around $US70 for two people with the apartments starting at $US120.

Hotel Del Rio (site here) This hotel is right on the beach about half a mile south of San Pedro. They have a wide variety of rooms ranging from $US30 up to $US100 during low season, but their cheapest rooms are very basic.

Captain Morgan’s Retreat – This resort is about 3 miles north of San Pedro and it’s where they shot one season of that awful “Temptation Island” TV show in 2000. Their cheapest rooms start at $US139 during low season, but they also have 1 and 2-bedroom villas that are $US159 and $US250 per night in low season, and up to $US420 per night in high season.

Azul Resort (site here) – Just to show you the absolute top end on Ambergris, there is the new Azul Resort. This consists of two 3,000-square foot private villas on 10 acres of beach. You get your own chef and nearly every other luxury imaginable, all for the low price of $US995 per night for two people. I’ll see you there!