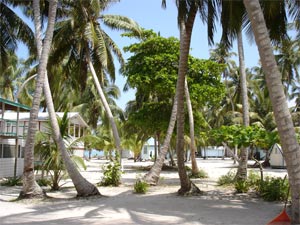 Perched comfortably atop the longest coral reef system in the Western Hemisphere, Belize’s tiny Tobacco Caye is a far cry from your overdeveloped Caribbean beach escape. With no hotels, no restaurants and no electricity, the charm of this island falls squarely upon its dramatically beautiful locale, and the network of family-owned guesthouses that accommodate weary travelers.

For decades, budget travelers have found a unique experience visiting this football field-sized island community, eating home cooked meals and snorkeling in the turquoise waters. Possibly the only place in the country where you can swim a mere 10 meters out from the dock and find yourself over a 100-foot coral wall teaming with giant Eagle Rays, Moray Eels, Lobster and a tremendous variety of brightly colored Caribbean fish and wildlife. 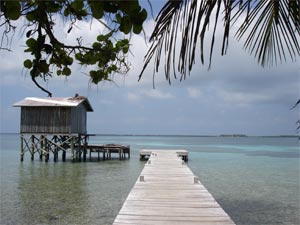 Tobacco Caye’s location directly on the reef leaves little to be desired, except maybe for amenities. While the sand is white, the water is turquoise and the little tiki hut on the island’s west beach serves a myriad of beers & cocktails under the moonlight, the collection of broken down old guestrooms and ramshackle beachside cabins are certainly not for the squeamish. Bring a flashlight or a lantern since there isn’t any power, and without air conditioning the rooms can get quite hot.

On the other side of the coin, with virtually no light pollution, the stars and the moon burst from the sky in a way rarely seen these days and the sea breeze is addictive. Insects can be a bit of a nuisance, but hey, it’s Central America and at $20-40 a day per person including three home-cooked squares (fresh caught seafood at almost every meal!) it’s tough to complain.

Getting to Tobacco Caye

Getting there is an adventure unto itself. The typical route is to take a bus to the largely Garifuna town of Dangriga on the Southern Coast and hire a lancha (water taxi) to take you to the small island. The river is a block from the bus terminal and several boats will be hanging out there. Expect to pay about US$20 per person, though fuel prices could change your fare substantially. From there it’s about a 30-minute boat ride in choppy waters as you pass dozens of tiny uninhabited or privately owned islands along the way and a myriad of bird-covered mangroves.

Another way to get there

The other way to get to Tobacco Caye is to hitch a ride on a Ragamuffin Tours sailboat, as they stop twice a week on the island while they travel between Placencia and Caye Caulker. While much more fun than the bus to say the least, expect to spend a day or two traveling each way and a pretty penny more for the nice ride. They also only spend one night on the island, giving you little time to break in your favorite hammock. 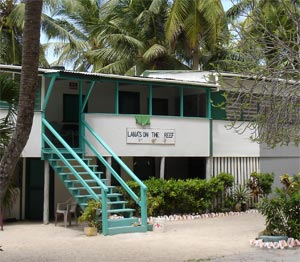 There are six guesthouses on the island with different things going for each of them.

Lana’s is the smallest with only a couple of dingy rooms and a small kitchen. That being said, Lana herself is clearly the Mother of the island and her cooking is excellent. Expect to have some of the local young men drop in throughout the day for a little of Lana’s cooking and to help her fix the place up a bit.

Paradise has the most well-located cabins on the Island, placed on stilts over the water with individual little porches. Try to get one of these if you can. They’re essentially wooden boxes that require you to walk to the main house for toilet access but did I mention they’re on stilts over the water with private porches?! I’ve heard rumors of Paradise providing small portion meals when the place is full so BRING SNACKS from the mainland if you’re staying here.

The other four places do little to distinguish themselves though things change regularly on Tobacco Caye. Some have snorkeling gear for their guests (although you cant rent stuff for cheap at the dock no matter where you stay) and some have little generators that provide guests with some evening light. You should definitely call ahead and make a reservation before coming to the island because with so few rooms available it CAN fill up.

In short, if a little bit of getting away from it all is what you seek, Tobacco Caye is calling.