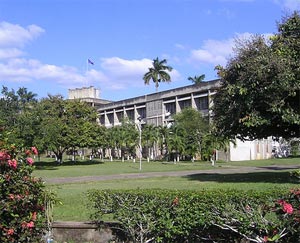 After Belize City was largely wiped out in 1961 by the violent Hurricane Hattie, this country – then known as British Honduras – decided to move its capital to a patch of land well off the coast where they’d have room to expand. In 1970 the capital was officially moved to Belmopan so this small city is where you’ll find the embassies as well as the government offices. With a population of around 12,000, Belmopan is said to be the smallest capital city in the world, but that alone is certainly no reason to visit.

Being that everything is fairly new, this is not a good place to look for historical buildings and ancient traditions. This is a compact and clean town that might be a good place to stop for a day or so on a larger tour of the inland parts of Belize, but it’s certainly not a stand-alone destination.

Hotels/hostels – There are no traditional hostels operating in Belmopan due to the fact that hotels are affordable and this isn’t a big backpacker destination. There are quite a few hotels in the town center, and this being a government and business center, many of them are geared to business travelers. Finding a hotel in Belmopan should not be too difficult, but it might be a good idea to make a reservation if you are going just in case there is some unforeseen event on the calendar.

What to do – Belmopan is a small and new town without a lot of obvious tourist sights. The center is quite clean and safe so just wandering around can be more pleasant here than in some other more dodgy cities in the region. Independence Plaza is the center of town and hard to miss. The official offices are here along with a few embassies, as well as a hospital and the university.

There is a market square next to the plaza. It’s filled with food vendors as well as stalls selling all manner of personal items and knick-knacks. If you’ve got a car you can reach Guancaste Park in just a few minutes. Guided tours show visitors examples of many locals birds, butterflies, as well as other flora and fauna.

Getting there – There is no commercial airport serving Belmopan. It’s conveniently located on the highway between Belize City, Dangriga, and San Ignacio. Lost distance buses leave to Belize City every half hour during the day for a fare of around $3. Buses also connect to many other cities in Belize so Belmopan has become a useful transit hub for travelers, if not much else.