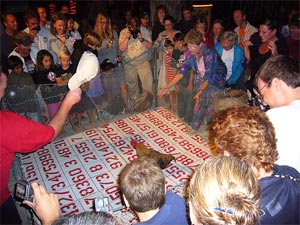 The Palace is the new casino on Ambergris Caye and it’s open six days per week. It’s closed on Wednesdays and that might be because the country’s most famous gambling opportunity takes place that day on the beach in front of the Pier Lounge bar at the Spindrift Hotel in the village of San Pedro.

Supposedly since 1988, this popular watering hole has been the host to one of the strangest events Caribbean tourists might ever get the chance to participate in themselves. It’s called the Chicken Drop, and if things go well you can turn one dollar into a hundred in just a few minutes.

It’s probably no coincidence that the event takes place right after the popular 4 to 6 Happy Hour at the bar. After all, many things that sound stupid before your first drink sound like a damn fine idea after two hours of discounted booze. And Belize’s famous Chicken Drop is definitely one of those things.

Here’s how it works: During the Happy Hour, bar patrons and other passersby purchase a number between 1 and 100 that corresponds to a square on a 10×10 grid inside a net out on the beach. After all the squares are spoken for, the staff brings out a basket with a couple chickens inside. One lucky gambler has the honors of tossing one of the chickens onto the board, but not before they are encouraged to shake it three times and then blow in its ass. The blowing party is supposed to be like blowing on dice to make them lucky, but it may actually help speed up the proceedings.

The chicken is dropped onto the board and usually appears to be stunned for a short period of time, probably unaware that its next bowel movement will likely determine who is buying the next round of drinks, at least for that person’s friends. It takes however long it takes, but if the chicken seems constipated at all another chicken is tossed in beside it to help motivate the first one, somehow.

The crowd roars, each hoping the chicken will eject its waste on their numbered square. Then it happens and 99 hearts are broken while 1 person is suddenly the belle of the ball. The reward for being the lucky one? First you get to clean up the chicken poop while your photo is taken, then you get the entire $100 pot to do with what you please.

You’d probably have to go all the way to Royal Ascot outside of London or the Longchamps racecourse outside of Paris to find a gambling event with more class than the Wednesday night Chicken Drop in San Pedro, but you’d have a hell of a time finding $2 bottles of Belikin beer at either of those places, so this is still probably a better way to spend an hour or two.