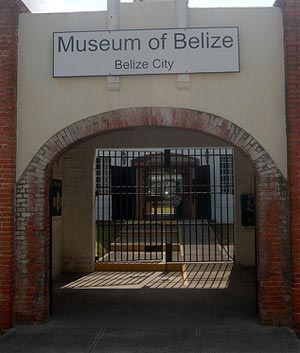 Visiting a stuffy museum isn’t near the top of most people’s lists when they come to a country like Belize, but there is an interesting spot in Belize City that should be of interest to culture vultures or visitors who care a bit about their host country, even for only an hour or two.

But seriously, the permanent collection in the Museum of Belize contains Mayan masterpieces that range from 600 BC to AD 1500, so it’s easy to get some perspective on the ancient local culture that mysteriously disappeared a few centuries ago. While the original artifact lives in a bank vault, an amazing replica of the largest carved jade head ever found in the Maya world (discovered in 1968 in Altun Ha) is on display here. Other jade items, intricately crafted pottery, and flint weapons are also parts of the popular permanent display.

Other wings in the museum house the official Belize stamp collection, and a display of photographs of old bottles (seriously). You can also have a look at displays highlighting local insects, but the piece de resistance might be the 3D model of the reef, cayes, atolls, shells, corals, and fish, which opened here in 2007. Prison buffs and museum completists will be happy to hear that one of the previous 19th Century cells is restored so visitors can get a glimpse of prison life from a bygone era.

US$5 for adults, free for children under 10

Gabourel Lane, Fort George, Belize City, it’s about 400 meters northeast of the Swing Bridge in the heart of the city.