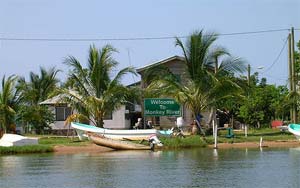 Here’s another of Belize’s small and out of the way attractions that I’d never heard of until just now, but is on my list for next time I’m in the country. Monkey River is the name of both a river and a town in southern Belize, and with a population of only 200 or so, we can all be forgiven for not knowing too much about it.

Once a thriving banana and lumber town with a population of around 2,500, Monkey River Town is a shadow of its former self. An October, 2001 hurricane destroyed much of what was left of the village, but it’s been nearly all rebuilt since then. Today the town runs on a combination of fishing and tourism, with the jungle/river tours being the centerpiece of the town’s offerings. There are no cars and only 2 streets in the village, so it sounds like a pretty relaxing place. There are 3 restaurants in town, from what I can tell.

Getting to Monkey River Town

The village is located about 15 miles southwest of Placencia Village, which is on the end of Placencia Peninsula, and most of the tourism comes from people beginning tours there early each morning. Monkey River Town itself is not accessible by cars at all, but a 12-mile road leading from Belize’s Southern Highway ends just across the river from the village. In one of the more quaint ways to enter a town that I’ve ever heard of, if you honk your car horn from across the river someone from Monkey River Town will cruise across in a small boat to fetch you.

The Monkey River and jungle tour 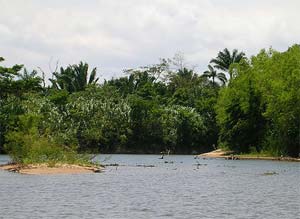 In less than an hour from leaving Placencia, you arrive at the mouth of the Monkey River. I assume you can also start this same tour directly from Monkey River Town itself, but typical of Belize, confirmation can be hard to come by unless you are standing right there yourself.

Descriptions of the river and jungle tour say that it begins with a slow cruise for a few miles up the river, as the guide points out all the interesting local flora and fauna along the way, including manatees, dolphins, and even the occasional crocodile. Then you reach a jungle trail where you go on foot with opportunities to see and hear howler monkeys, deer, ocelots, coatimundis, and many more. I can tell you from experience that howler monkeys don’t really howl like you might think. It’s more of a low, gutteral bellow that can be heard from up to a mile away.

After the jungle portion you get back in the boat for the cruise back into the village, where you’ll eat the lunch you ordered before you left on the tour at one of the family-run restaurants in town. The whole tour leaving from Placencia should cost somewhere around US$40 per person, but I wouldn’t be surprised if you couldn’t get it for less if there is a group of you.