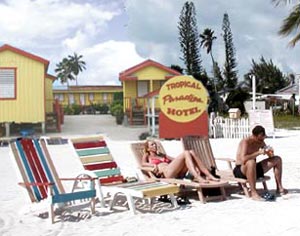 Finding a hotel on Caye Caulker is rarely a problem, but if you’ve never been there before it’s important to know what to expect before you choose. Yes, the small 5-mile-long by 1-mile-wide island off the coast of Belize City is considered a resort island by many, but it’s not the sort of “resort” most people think of when they use that word.

There are no paved roads on Caye Caulker and a permanent population of only about 1,300. There are no chains there yet, therefore nothing you’ve ever heard of before. The recent tourism boom has brought the number of places calling themselves hotels up to about 60, but there are still fewer than 1,000 rooms available in total. So doing the math, this means the average “hotel” has fewer than 20 rooms, and in fact many of them are just two or four units.

Probably the best news is that hotels in Caye Caulker generally range from cheap to moderate. There are a few higher-end places that are basically full house rentals – often with a one-week minimum – but most places tend to offer few frills and are geared towards international budget travelers and the backpacking set.

Budget – There are loads of places that would be considered budget elsewhere, but we’ll call them midrange on Caye Caulker because the cheapest beds are at Tina’s Backpacker’s Hostel. For around $US10 per night you can sack out in one of their five bunkrooms, or if you are a couple you might be able to reserve one of their two private rooms with double beds for around $US20. The place is very popular and gets great reviews.

Midrange – The Tropical Paradise Hotel has 25 rooms ranging in price from $US38 up to $US100 for their honeymoon suite with its own Jacuzzi. Most rooms have two beds, with the lower-priced rooms having just ceiling fans while the pricier ones have A/C and cable TV. The Vega Inn and Gardens sits on a large piece of land near the center of the village and offers rooms from around $US50 and up. Again, the more basic rooms only have a ceiling fan, but with the tropical breezes that is usually enough. The Belize Odyssey Resort is near the southern tip of the island just past the airstrip, but tell them when you’ll be coming and someone will meet you at the Water Taxi in a golf cart. They offer air-conditioned rooms that are quite plush for Caye Caulker, starting around $US65 per night.

High-end – The Auxillou Beach Suites is an example of luxury on Caye Caulker. Starting around $US99, each unit has one bedroom, a kitchenette, a balcony, air conditioning, wireless internet, and cable TV. For even more privacy, Chateau Giselle is one of quite a few single full-home rentals. Starting around $US85 per night, you can rent this entire 3-bedroom, 2-bath house. There are queen beds in each room as well as ceiling fans, but no air conditioning.

As long as you can spend $US20 per night or more for each person, there are plenty of options in between the ones mentioned above. The vibe on Caye Caulker is very laid back and very Caribbean. If you are looking for something more luxurious than the high-end on this island you’ll want to try Ambergris Caye next door. It has much less of a backpackers feeling and the pricier properties there are more in line with chain hotel standards, but usually with prices to match.