Birdwatching on Ambergris Caye – The People Perch at the Caribbean Villas 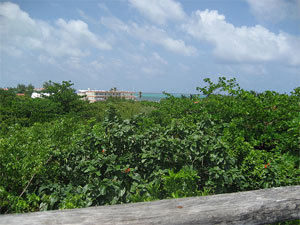 Birdwatching, and the more intense version that is often called “birding”, are very popular throughout Belize. The jungle areas of the interior have far more to offer most people who are serious about birding, but that doesn’t mean you can’t experience some of this nature-loving activity on Ambergris Caye.

About three-quarters of a mile south of the center of San Pedro village on the island you’ll find the Caribbean Villas resort right on the beach. This 12-room complex is surprisingly affordable for the area, and it has several features that make it truly unique. The most unusual thing and probably the greatest hook for the Caribbean Villas is that it’s set up partially as a bird sanctuary and they have their own 3-story “People Perch” built specifically for birders.

The grounds of the Caribbean Villas are about half in their natural state, which is unusual for resorts in the area. The combination of mangrove forests off the coast and the jungle just off the beach are ideal homes for the many birds native to this fertile area, so the 3-story People Perch they have erected makes for a perfect platform from which to see all the action. You get a full 360 degree view from the People Perch, so even if you aren’t going to spend hours with your binoculars you’ll be able to appreciate the amazing views of the Caribbean, the San Pedro Lagoon, the Hol Chan Marine Preserve, and San Pedro Town.

According to the Caribbean Villas official website, the birds most often seen by those on the People Perch are: vireos, the common tody flycatcher, great Kiskadees, black catbirds, seedeaters, golden fronted woodpeckers, orioles and many others. 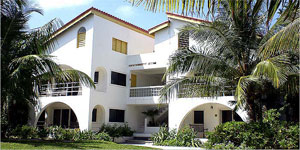 This is considered a 2-star property on Ambergris Caye, but those ratings aren’t standardized so they shouldn’t be taken too seriously. Previous guests give the place high marks so you are likely to enjoy your stay as long as your expectations are in line with reality. The price of the rooms is quite low for this area, so it would be unfair to expect a luxurious honeymoon cottage, but this is not just a set of stark beach cabins as well.

The Caribbean Villas is right on the beach, and they also have their own pier with two artificial reefs they’ve created near the end of the thing. This makes it an excellent place for an introduction to snorkeling in Belize, and signing up for a half day snorkeling trip is easy in San Pedro village if you get the bug after your dip from the pier.

Caribbean Villas has 4 room types and 3 different rate seasons. You can see a complete chart on the rates page on their website, but the summary is the cheapest rooms for 2 people go for US$65 from mid April to mid December, US$78 from early January to mid April, and US$85 during the busy Christmas weeks. There is also a minimum stay of 4 or 7 nights during these high seasons. Their most expensive room sleeps 6 people and the prices are US$225, US$270, and $US295 depending on season.

As with so many places in Belize they book rooms and answer inquiries by e-mail, but you can also book at the Caribbean Villas on some Belize hotels search engines, and sometimes the prices are even lower than the rack rates given on the official site.