What to Eat in Belize: Famous Belizean Food

Welcome to Belize, a country so diverse in history that its cuisine is like taking a trip back in time. The county may not be home to many world-renowned dishes or any Michelin starred restaurants just yet, but traveling through Belize for a week or more will undoubtedly leave you longing for more of the country’s best dishes. Belizeans are very proud of their culture and that love comes through in their food. If you have not visited Belize and sampled some of their native cuisine, now is definitely the time!

Belizean cuisine is influenced by so many ethnicities and their respective foods that it is one of the more misunderstood and underappreciated cuisines. With influences including Maya and Mestizo, Creole (Kriol), Garifuna, Mexican, and more, Belizean cuisine is varied and pays homage to a variety of historical favorites.

Unlike some places, many Belizean specialties can be found throughout the entire country. As a unique departure from some other popular destinations, many recommended “tourist restaurants” are frequented by locals, often times proving to be some of the best spots to sample Belizean cuisine.

Here is a brief roundup of some of Belize’s more well-known dishes. 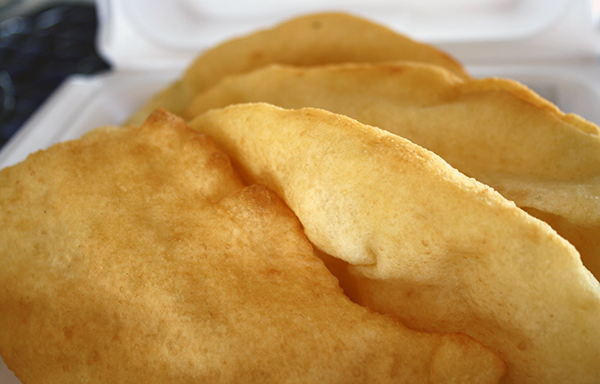 Much like a tortilla is to Mexican cuisine, the fry jack is to Belizean cuisine – at least at breakfast. A fry jack is a staple in Belizean cooking, typically consumed during the morning meal. It is nothing more than a simple fried piece of dough, often accompanied by jam or honey, or even beans and eggs. Fry jacks are similar to beignets made popular in New Orleans or sopapillas you find in Mexico.

Fry Jacks are available all throughout Belize, and you can find them on nearly every breakfast menu at restaurants and bakeries. Some places offer them as a side to a larger entrée, or bakeries may sell them stuffed as a meal in itself. 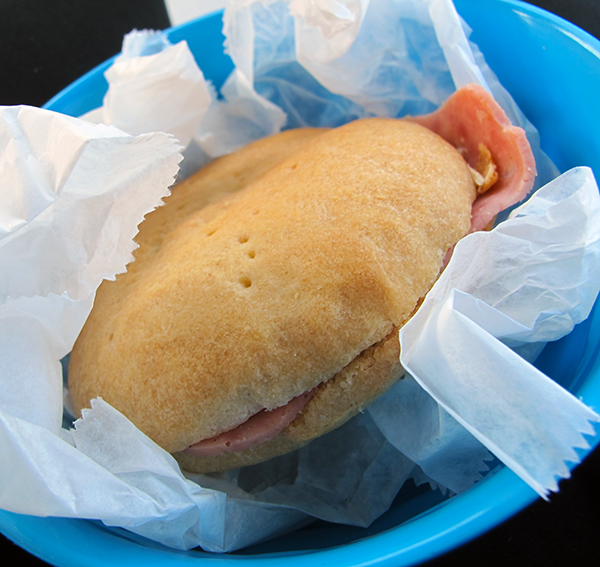 Another breakfast staple is the Johnny Cake, which is also easily found throughout Belize. These have a long history in Native American and some Caribbean cultures and are often referred to as Journey Cakes. They were typically made with cornmeal and kept for long periods of time, making them an ideal travel food.

The Johnny Cakes found in Belize are almost always made with flour and may include coconut milk in the recipe. They tend to be a heavy, dense type of bread and are commonly eaten as a breakfast sandwich, with deli meat and cheese inside. 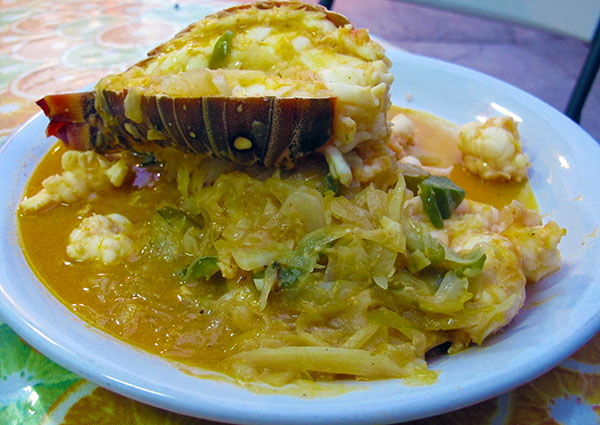 With its coastal location, Belize is renowned for its lobster. Lobster season kicks off around mid-June with a big Lobsterfest celebration, and the season runs until approximately Valentine’s Day. You can find just about anything made with lobster during season, but the most popular items include ceviche, lobster burritos, grilled lobster tails, and more.

The best places to find good lobster include Ambergris Caye, Caye Caulker, and Placencia, not coincidentally the three spots that feature Lobsterfest celebrations. 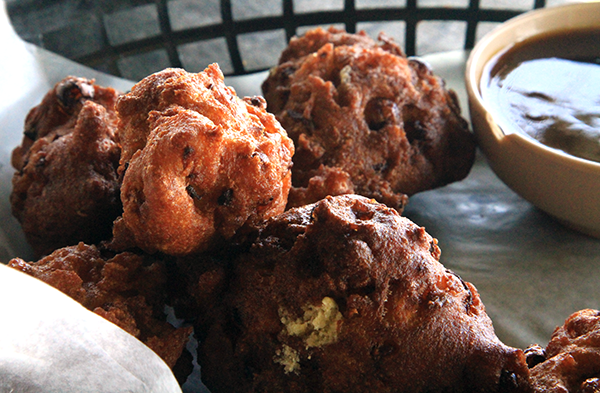 Conch Fritters are probably the country’s most popular appetizer, especially by tourist standards. These are especially tasty on the coastal regions and the cayes. A conch fritter is chopped conch meat that is deep-fried in a flour batter. They are made into crispy balls and served with a special dipping sauce.

As conch fritters are more casual fare, it is quite common to see them on most bar and starter menus around the country. 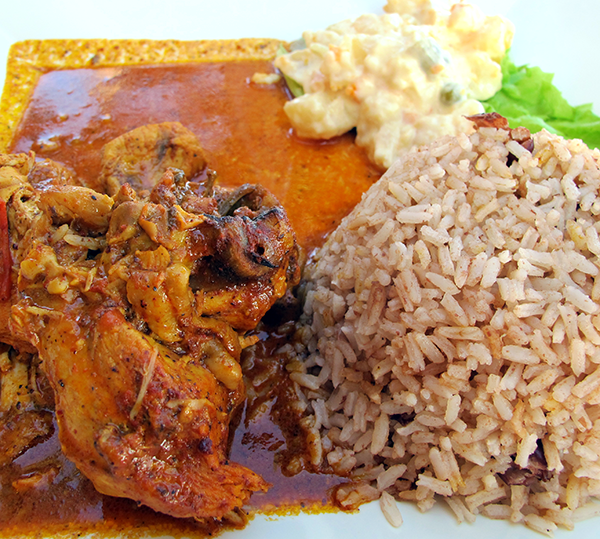 One of the most common main dishes is stew chicken. It’s a Kriol (Creole) based recipe that includes a wide range of spices and recado rojo, made from annatto seed or achiote. While stew fish is often also an option, stew chicken is more commonly seen and the one many consider the closest thing to a national dish in Belize.

Rice and beans is another Belizean staple, which is an accompaniment to most main dishes around the country. When termed “Rice and Beans”, they are cooked (sometimes in coconut milk) and served together. When you find “Beans and Rice” on a menu, you should assume they are cooked and served separately. 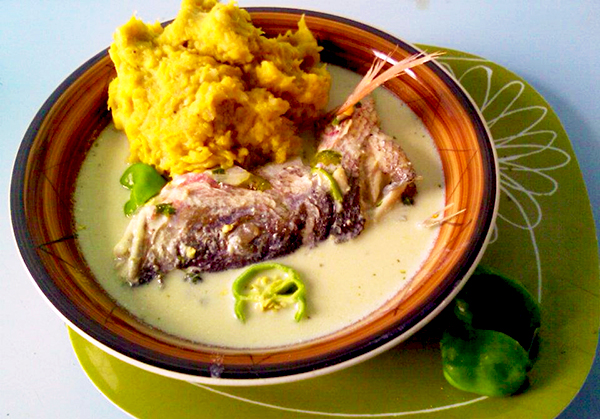 Hudut is a local Garifuna specialty that is definitely worth a try if you have the opportunity. It is a fish stew, or whole fish presentation, served in a coconut-milk broth. Hudut is typically accompanied by fried green plantains that are most often mashed by hand using a large mortar and pestle.

If you are hoping to try Hudut, look for it in parts of Belize with Garifuna, or Garinagu (the proper term for people of Garifuna culture) populations, like Dangriga or Hopkins. 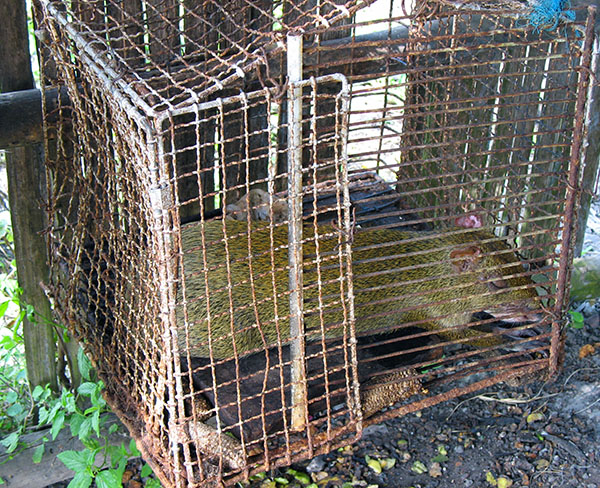 For more adventurous eaters, seek out the gibnut, which is often called “The Queen’s Rat” or “The Royal Rat” because it was once served to Queen Elizabeth, making for interesting headlines back in London. The gibnut is a large rodent, with many claiming its taste is quite similar to rabbit.

Gibnut is not necessarily readily available on regular restaurant menus, especially in places that may cater more to tourists. Just ask around and most locals can tell you which places in the area would be most likely to serve gibnut. 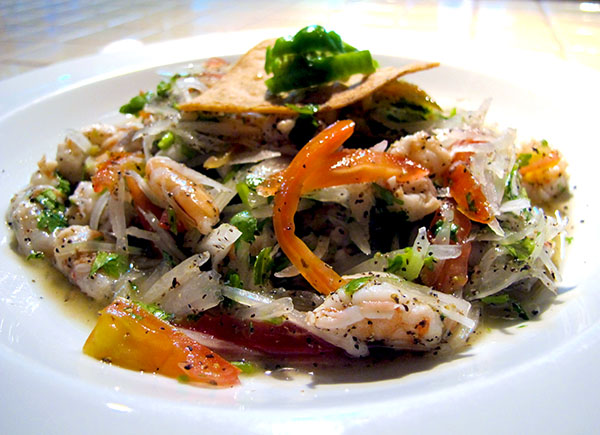 While lobster warrants its own mention as a key Belizean food, so does ceviche. Especially on Ambergris Caye, you could spend days eating nothing other than ceviche up and down the island. If you have not tried it, ceviche is a cold dish with various types of seafood “cooked” in lime juice. Often sliced or diced onions, tomatoes, and sometimes olives are included. Most common types of ceviche found in Belize include shrimp, octopus, conch, lobster, or a combination. A less common type is horse conch, which is worth a try if available. 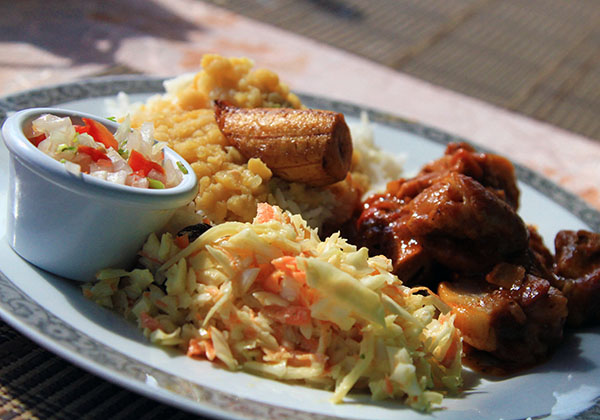 Seeking a little more culinary adventure, ask about cow foot soup or pigtail, both very local dishes. Despite their names, cow foot soup and pigtail are two of the tastiest dishes available in Belize.

The cow foot broth, with its plentiful vegetables and seasonings, can easily rival some comfort soups from home – even if you don’t eat the cow foot itself.

Pigtail is surprisingly one of the most tender cuts of pork and comes stewed with a variety of seasonings, often served with plantains and split peas on the side.

Availability of cow foot soup and pigtail can vary, depending on where you are in Belize. If you are unable to locate either dish, most locals can tell you when and where to find the best pigtail and cow foot soup in town. If you are traveling on Ambergris Caye, Friday is one of the best days to try both.

Photo of Hudut used with permission from The Lodge at Chaa Creek. All other photos from Erin De Santiago and may not be used without permission.