The time I rented a bicycle on Caye Caulker, Belize 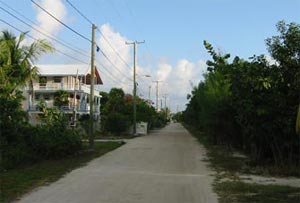 This isn’t so much a comprehensive guide to renting a bicycle on one of the islands, but more a story of how wonderfully and simply things can work in this tiny country.

I was living in New York City before I left on my 2005 round the world trip, which actually started in December 2004. I stopped to visit some friends in Miami and then Los Angeles (where I’m from) before setting out traveling for a whole year. My first international stop was Belize, and I knew I wanted to check it out for a couple days before continuing down through Guatemala.

So after a couple weeks spent in Miami and Los Angeles and a plane change in Dallas-Fort Worth, I suddenly found myself in Belize and a couple hours later I was on Caye Caulker. I was/am a cheapskate and backpacker, so I chose it over Ambergris Caye, and I liked it a lot right away.

I arrived on the island by water taxi just after dark, and there are very few lights of any kind there so I was completely unable to draw a mental picture of the place until the following morning. I woke up early and decided I’d rent a bike to see the island most efficiently. I had to dodge the occasional golf cart on the dirt roads, but there were very few people and no cars at all. A bike rental seemed like an ideal way to familiarize myself with Caye Caulker.

So while on foot I saw a few signs in front of small businesses and even houses for people renting golf carts and bicycles, but I didn’t see any attendants handy to answer my questions. I then spotted a older woman standing on the porch of her modest house, near a sign that advertised bicycle rental. I also saw about 5 or 6 different bikes chained up out front, and I figured at least one of them would suit me.

“How much?” I asked. She told me bikes were US$2 per hour or US$7.50 for the whole day. “Hmmm…” I thought to myself, because I had no idea where I’d even go in a whole day. I knew it was a small island, so I told her I wanted to rent a bike for 2 hours. “Do you need a credit card or a cash deposit for the thing?” I asked, but she looked puzzled. English wasn’t her first language, but this seemed to me like an easy enough question anyway. “Pay first and please bring it back,” she said, completely describing her security measures. So I peeled off 4 crisp greenbacks and handed them over, and I did promise to return it to her porch when I was done.

The used bike had seen better days, but the size was ideally suited for a large child or small adult, or in other words, someone about half my size. Within the first hour I’d traversed every single road on the island between 2 and 3 times. But I wanted to get my four dollars worth so I kept riding anyway.

I parked it briefly in front of the bar that overlooks the Split, and splashed around in the water for a few minutes. Now satisfied that I’d seen everything one can see from the saddle of a too-small bicycle on Caye Caulker, I rode back to the bike’s home in the center of town, and without much trouble I located the exact spot where I’d rented the thing. Mission accomplished.

For someone who’d just left NYC, Miami, and LA on a new adventure, I was still having trouble computing that I could rent a bike on a (sort of) resort island for $2 per hour, and then not even have to give them my name, much less a credit card, in return. I had hundreds more fascinating revelations over the rest of the year on the road, but the first of those was that Caye Caulker, and Belize in general, felt a world away from my life just a few days earlier.