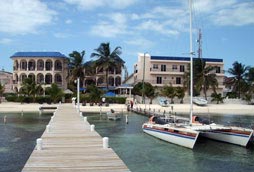 Hotels in San Pedro span the spectrum from low budget way up to posh mini-resorts, but what you won’t find here are large chain hotels of any kind. If you’ve never been to Belize or San Pedro before you are probably in for a bit of a shock when you get here. There are only a few paved roads on the whole island and there are no fast food franchises or anything else you’ve ever heard of before. This is an extremely laid back place that is its own world.

Ambergris Caye and San Pedro are better for families and honeymooners and so forth, and the range of hotels on the island is wide, but nearby Caye Caulker is also worth considering. It’s even more laid back and is where hippies and backpackers tend to stay. The diving and snorkeling scene on both is about the same, so if you think you might be interested in this you should check out the Caye Caulker hotels page.

Pedro’s Backpackers Inn – Okay, so I’m already going a bit astray here because the cheapest place to stay on the island is not right in the village although it’s a short walk away. Just to get an idea of the price spectrum from the bottom, I’ve included it here, and it is very popular. This is the only “hostel” on the island, and it’s not really a traditional hostel with large dorm rooms. But they do have rooms with 2 single beds that start at $US10 per person, as well as “deluxe” rooms for two people starting at $US35 per night. They’ve also got a pizza restaurant and a sports bar.

Lily’s Hotel – This is right in the center of town, but also right on the beach. It’s a small family-run hotel with air-conditioning and small refrigerators in each room. They have single and double rooms, with doubles ranging from $US55 to $US75 depending on season.

Spendrift Resort Hotel – This one is just a bit south of Lily’s and also on the beach in San Pedro. They have economy rooms starting at $US47.50 for two people, all the way up to a beachfront apartment that goes for $US110 for two people.

Seven Seas – This is one of the most luxurious places in the village area. It’s also right on the beach, but they’ve got a pool as well. Their double rooms start at $US135 in low season up to $US175 in high season, but you can get 30% off those rates if you book directly on their website.

Aqua Marina Suites – This is a new place also on the beach in San Pedro, and they are under new ownership and changing their name to Sunbreeze Suites. Their rates for double rooms range from $US140 to $US175, depending on season.

For the most luxurious places you should look on the Ambergris Caye page. There are no 4 or 5-star places right in San Pedro, but a few are not far from the village.