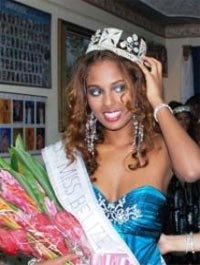 On August 2, 2008, Miss Charmaine Chinapen captured the coveted Miss Belize title, beating out 5 others in the pageant, who were picked from the 11 who applied. Keep in mind that Belize has a total population of only around 250,000, and much of it is fairly rural, so those low numbers aren’t quite so shocking. Nevertheless, the winner turns out to be really gorgeous, so the pageant met its objective.

Chinapen will now be eligible to compete in the Miss World pageant on October 4 in Kiev, Ukraine, so let’s keep our fingers crossed for her in that one. She was born in Curacao and later moved to Belize and has become a naturalized citizen. She currently is majoring in chemistry at St. John’s University in New York, and says she wants to be a neurosurgeon working in war zones with Doctors Without Borders. In addition to winning academic competitions in high school in Belize, the 21-year-old also works part-time as a print model for Pantene Pro-V among other clients, so I’ll bet she’s really popular among the other girls her age. 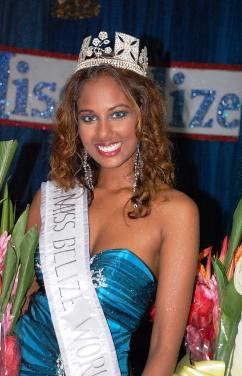 Let’s hope things go better for Chinapen than they did for last year’s Miss Belize. Tanisha Vernon captured the crown in last year’s contest, and several months later she reported that she’d never received any of her prizes, including the scholarship that was the main motivator in the first place. Vernon stopped participating in events as Miss Belize, and after going on a vacation to the United States, she was stripped of her crown in an email, and was officially replaced by Iris Jessie Medina just last week.