Leonardo Di Caprio buys an island for an eco-resort 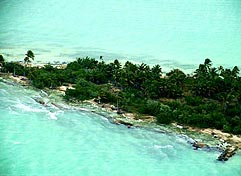 Many of us daydream about owning our own island, but Hollywood star Leonardo Di Caprio has actually done something about it. Multiple media reports say that the 30-year-old actor has bought Blackadore Caye in Belize, and he’s planning on building an eco-friendly resort on it.

Sources in Belize are reporting the Di Caprio bought only a piece of the 104-acre island that sits just a few miles west of Ambergris Caye for just over $1 million. They also suggest that the person who bought the entire island for $1.7 million is planning on selling other lots to various celebrities including Robert De Niro and Tiger Woods.

The 2-mile long Blackadore Caye is lined with sandy beaches, which is unusual for the area and makes it an ideal spot for well-heeled travelers. Di Caprio is reportedly already in planning stages on a luxury resort that will feature just a few exclusive villas, each with a private pool and terrace, as well as access to the beach. But the environmentally-conscious actor is taking the extra step of including the use of renewable energy sources, and designing it in such a way that respects the island’s wildlife and natural tropical setting.

Building the resort will cost millions of dollars, but Di Caprio is said to be developing it in cooperation with the nearby high end resort called Cayo Espanto. Blackadore Caye is a 25-minute boat ride from the Belize Barrier Reef, which is a UNESCO World Heritage Site.

The long and narrow island is also said to be well suited for an airstrip, which comes as a great relief to me. I’m fanatical about my eco-friendly resorts and such, and it’s always a major pain when I have to land my private jet at a far away airfield and then reach the eco-resort islands by taking a limo to harbor and then rent a yacht to actually reach my carbon-neutral resort. Yay Leo!