Getting from Belize City to Tikal 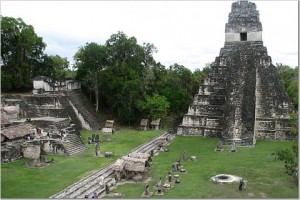 Belize City is the largest city in Belize and also the transportation hub of the country. It is home to the only international airport in Belize.

Tikal is a large archeological site in Guatemala. During the Classical Period it was one of the most important Mayan cities. Today, it is one of the most fascinating Mayan sites to visit mostly due to its remoteness and jungle setting. And there are still uncovering works going one so if you are lucky you can catch archeologists at work. Among the Mayan cities in Central America, Tikal is the most breathtaking due to the impressive buildings restored scattered among ruined buildings still hidden by the jungle.

The nearest gateway to Tikal is Flores, which is served by an airport. In Flores, there’s one travel agency which has the monopoly when it comes to taking visitors to Tikal. They will pick you up from the hotel in the morning and the round trip journey costs 60 Guatemalan Quetzal (about US$8).

The gateway to Tikal is Flores and that’s where the planes land and the buses stop. It’s much cheaper to travel by bus (about US$21*) than to fly.

Belize City is served by two airports but only Philip S. W. Goldson International Airport (BZE) handles both international and domestic traffic. It is located about 30 min from Belize City.

Flores is the gateway to Tikal and home to Mundo Maya International Airport (FRS). It is located in the suburb of Santa Elena and gets both international and domestic traffic.

Tropic Air is the only airline flying between Belize City and Flores. From Belize City there are two connections per day to Flores and the adult single fare is US$128.50. The adult return fare is US$223.50.

>>read more about Flights to Belize

Buses from Belize City to Tikal

Two bus companies operate between Belize City and Flores, the gateway to Tikal. The travel time is about 5 hours.

Driving from Belize City to Tikal

You can rent a car and drive the 272 km from Belize City to Tikal. It should take about 6 hours. Make sure to ask the rental company whether you are allowed to take the car across the border.

Note: *at the time the article was written