Getting from Belize City to Caye Caulker 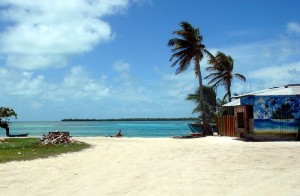 Caye Caulker is an island off the coast of Belize, popular among backpackers and budget travelers because of the relatively low prices , laid-back atmosphere and abundance of bars. There aren’t any proper beaches but you can put a plastic chair on any dock and soak up the sun. The only three roads in the city are all sandy so relay on your feet for getting between places or shall I say between the hotel and the bar?

Belize City is the transportation hub of Belize. Regardless of where you need to travel, you’ll either depart from here or connect through here.

The cheapest way to travel from Belize City to Caye Caulker is by boat. There are five departures per day between the two places and the adult single fare is US$10*.

Both Philip S. W. Goldson International Airport (BZE) and Belize City Municipal Airport (TZA) serve Belize City. BZE is the only international airport and both of them offer flights to /from Caye Caulker Airport (CUK), located on the southern end of the island.

>>read more about Flights to Belize

A cheaper and easier way to travel between Belize City and Caybe Caulker is by boat. They depart from Belize City four times a day (the first boat is at 9 a.m.) and they are operated by San Pedro Belize Express. The single adult fare is US$10. The round trip fare is US$17.50. Tickets can be reserved online here.

From Caye Caulker to Belize City you can also catch a boat operated by Caye Caulker Water Taxi Association . There are also four departures per day and the first boat leaves Caye Caulker at 8:30 a.m.

Note: * at the time the article was written