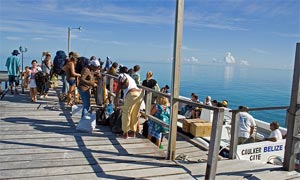 You can fly from Belize City to Caye Caulker or Ambergris Caye, and if you are very wealthy and have a fear of watercraft you can actually fly between Caulker and Ambergris, but most people ply this triangle on the famous Belize Water Taxi. It’s a mini adventure as well as a means of getting around, so you should be looking forward to it if you aren’t already.

First off, let’s talk about the name. It’s not really a taxi in any way, so you have to wonder where they came up with that one. And fortunately, it’s also not in the same price range as Venice water taxis so you don’t have to worry about selling all your possessions just to afford the trip. The highest price here is $US10 each way, but you’ll have plenty of company.

The Belize Water Taxi is basically an open-deck speed boat that is somehow able to fit any number of passengers on board, including their luggage, even if the task seems physically impossible just moments before departure time. If you arrive at the Marine Terminal in Belize City (about a $20 taxi ride from the International airport), you’ll be greeted by a minor version of typical Central American chaos, but at least everyone here speaks English. Find the Water Taxi ticket counter inside and buy a ticket for the next scheduled departure. There are other counters that sell bus tickets and other things, so it’s a bit confusing at first. 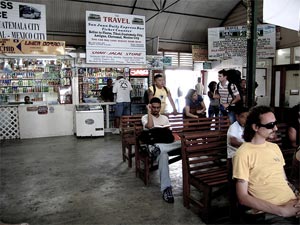 As your departure time nears, hopefully your boat will arrive as well. Especially if you take a later departure from Belize City, you’ll notice that many of your fellow passengers are actually island residents. Those cayes get a lot of tourists, but they aren’t big shopping destinations. Most locals have to make regular runs into Belize City for anything more than just the basics. So you and your luggage will soon join the crush of locals and other tourists to board the vessel. The luggage and other supplies get piled up in the center, and just when you think it will never fit, the magicians/crew members find a place for everything and off you go.

You and your new best friends, who are all hopelessly sandwiched together if you are lucky enough to get a seat, will idle out of the marina and then gun it after clearing the outer buoys. The scenery isn’t great, but at least the boat is really loud. About 45 minutes after departure, you’ll pull up on the Caribbean side of Caye Caulker at a tiny pier that serves as the main transit hub. If you’ve never been to Caye Caulker before, you’ll probably be shocked at how mellow and un-resortlike it is.

Caye Caulker visitors get off as a few Ambergris Caye-bound passengers get on, and 30 minutes or so later the Water Taxi arrives on a similar pier in San Pedro, which is the village in the center of the island. Then the cycle starts anew as the boat heads back to Caye Caulker for a quick stop on the return trip to Belize City.

No reservations are required

Just as with so many other things in Belize, the Water Taxi system is pretty relaxed. You don’t need advanced reservations and they claim they can take any size group no matter how large or small. The secret to doing this is they have different size boats so if it looks like a big crowd they’ll take a large boat, and if it looks like a really big crowd they’ll take two boats.

The Water Taxis leave every hour or two, but only during daylight hours. The first one of the day leaves around 6:30 or 7:00 from each place, and the last one leaves around 5:30 p.m. Check the following sites for up to date schedules, which are the same on both sites.